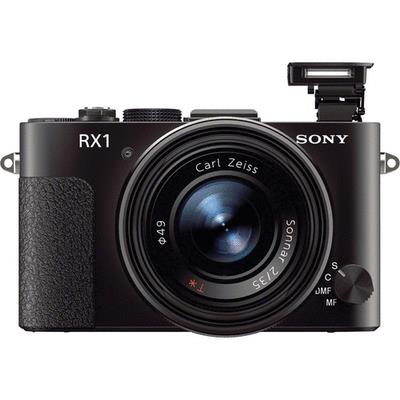 We’ve heard today that the guys from Photoprice Canada have leaked a super secret pics of a new full-frame camera with fixed Carl Zeiss 35mm f/2.0 compact lens on it.

Now after what sony has innovating with the one-inch sensor inside the point and shoot RX100, it seems Sony is now going to put in a full-frame 35mm sensor inside an upcoming compact camera known as the RX1. So the big Sony surprise wasn’t really a NEX alike interchangeable.

The new Sony RX1 looks like that is barely larger than the DSC-RX100 but with a bigger lens to go with that ginormous sensor. The lens in question is a 35mm f/2.0 Carl Zeiss lens that looks like it’s removable but is fixed to the body. Due to the fixed nature of the lens the RX1 is not going to be pocketable like the RX100 but it’s still looks way smaller than most DSLRs and not even close to those with a full-frame sensor inside. Despite being fixed the lens has manual focus and aperture adjustment dials just like on removable lenses so those used to DSLRs can feel at home.

Other noticeable features include a focus mode dial next to the lens, built-in flash on top with a hot shoe next to it for another one or a mic, mode adjustment dial, shutter release with a power ring and an exposure adjustment dial. as we can see in the leak pics above.

In conclusion, with a sensor that big inside, you just have to expect some tremendous image quality from this camera. Unfortunately, the camera seems that it would come at a hefty price of around $2,799. However, for someone who wants a high quality camera that isn’t the size of a handbag, this seems like a very good choice.