Nokia City Lens shows up in a video, and now available for first-gen Lumias, more developed version in works for the next-gen Lumias 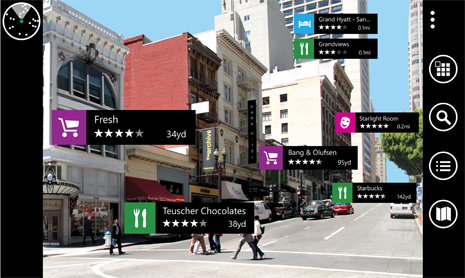 Nokia used the City Lens augmented reality app to tease the new Lumia phones before they were announced, but the app is not exclusive to the Lumia 920 and 820. Sure, the duo of Windows Phone 8 handsets will be getting a more powerful version, but older, WP7-running, Nokia phones can grab City Lens right now.

An updated version of the app will be available for the WP8 Lumia models, the 920 and 820. It will have the ability to hide POIs if they are not in view (obscured by a building), it will let you pin a POI category or favorite search to the start too.

For those who don’t know what City Lens is ? or haven’t tested the beta of the systeme ? Nokia City Lens is Nokia’s location-based augmented reality application. Using the phone’s camera viewfinder, Nokia City Lens provides an augmented reality overlay view of buildings and instantly highlights places of interest. It basically turns sight into the next interface for searching the world around you.
Source : Nokia