Algoriddim’s vjay gets remixed for iPhone

When it comes to holding the party down on an iPad or iPhone, djay by Algoriddim’s been a front-runner ever since it came out. Then came vjay for video spinning iPad owners. Now, that video follow-up is ready for the main arena, as it’s just been release for iPhone / iPod touch.

Now you can mash-up your favorite videos right on your phone, add soundtracks to your existing clips, and throw down some effects for good measure. If you kinda dig what you create, you can — of course — share it with the world, or throw it up on the big screen. Not sure your cat clips will cut the mustard? Worry not, as there’s purpose-made bundled content thrown in with the deal. And at just $0.99, it won’t hurt the pocket it was built for, either.

Mix, scratch and bring your videos and music to life with Algoriddim’s new vjay™ app for iPhone 5

LONDON, UK – November 15, 2012 – In a slick back-to-back move, Algoriddim is following up its blockbuster djay app with an iPhone version of its highly-acclaimed video mixing app vjay, which promises to bring personal video mashups to the masses. Anyone with an iPhone 5, iPhone 4S or even the new iPod touch can now mix videos, add a soundtrack to footage from the iPhone video library, or simply add some snazzy looking special effects to videos shot with the iPhone’s built in camera.

vjay for iPhone also integrates directly into the iTunes Store so users can browse, search, preview, and purchase their favorite music videos and easily remix them using stunning transitions as a new and engaging way to experience their favorite artist’s music videos.

Those who feel brave enough to showcase their personal mashups to a wider audience will benefit from the integrated social share buttons to instantly and directly post the results of their work on Facebook or YouTube. Even for those users without a huge collection, the new vjay directly integrates with iPhone’s video-recording element in the camera app, includes pre-bundled video content from electro-pop superstars Far East Movement, video artist Eclectic Method, DJ & MC master J-Live, and many other clips and loops so fans can sample and add their favorite beats and begin mixing music and video content right away.

Ultra-portable yet powerful and packed with features the new vjay for edition takes full advantage of the phone’s widescreen aspect ratio (16:9) and replicates the wow factor of the existing iPad version on a palm-sized scale thanks to a dynamic user interface that automatically adapts to portrait and landscape orientation.

Hooking up the iPhone, iPad or iPod touch wirelessly via Apple TV or to a high-definition TV by using an HDMI adapter means vjay for iPhone mixes can easily be beamed onto the big screen for friends and family to marvel at. Meanwhile, full iOS 6 compatibility enables budding VJs to preview sound and cue up tracks seamlessly while mixing up a storm.

Hidden behind the polished design of the app is a collection of features to mix videos, a raft of audiovisual effects and performance tools features , and VJing staples such as beat and tempo detection, wave form display and 3-band equalizer to blend songs and videos seamlessly together and create unique mixes.

Users of the iPad app are in for a treat too as a reloaded version, free for existing users) not only mirrors the impressive feature set of the iPhone edition but also now comes with several new features including multiple cue-points, the sharing capabilities, and a new full portrait mode to support the Numark iDJ Pro MIDI controller to give it a professional edge. 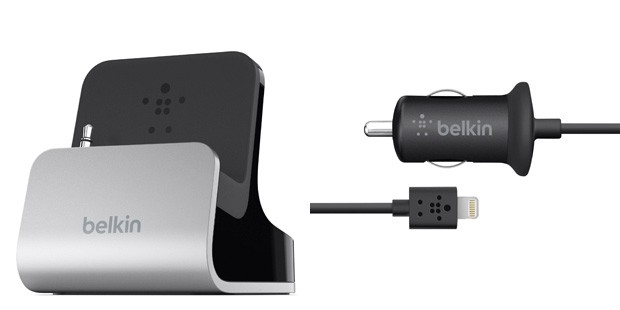 When Apple launched the new Lighting connector with the iPhone 5, they immediately made all the existing accessories for iOS devices obsolete (unless you plan on using one of the optional adapters). However, it looks like it’s not going to take take long for accessory makers respond to the change and come out with new accessories designed for the new interface.

At $29.99 each, both accessories are considerably expensive for what they do and it would actually be cheaper to buy Apple’s adapters and use your old accessories. It would be best to wait for more manufacturers to release their products before jumping into the Lightning accessory market.

Pinch is an interface which connects the displays from multiple touch devices together. It is currently under development by a research group at the Tokyo University of Technology.

When the user places a thumb and index finger on two adjacent screens and pinches, the screens link up. The screens can be lined up freely, whether vertical or horizontal, and the pictures can be matched up if they’re misaligned.

The connected devices share each other’s position and screen size via Wi-Fi. With this system, it’s even possible to connect devices with different-sized screens, such as iPhones and iPads.

“This Pinch interface we’ve developed is used to create applications that make devices react when they’ve both been pinched, so they work together. In the case of a graphics application, when the devices recognize they’ve been pinched, they can show the whole picture as if it’s on one screen.”

“You could use Pinch to develop a variety of apps. For example, with a music app, if you connect devices horizontally, you could keep playing music for a long time.”

“People probably own just one of these devices each. So, I think people could communicate in fun ways, by getting together with friends and putting their devices next to each other. In the case of advertising, I think you could create applications where people put their devices together to talk about the products.”

“We’ve presented Pinch at conferences, but we haven’t shown it to the public yet. We’d like people to use this system to develop apps. So, we’re offering Pinch to developers and are basically just asking them to do something with it. We’ve just started several projects like that.” 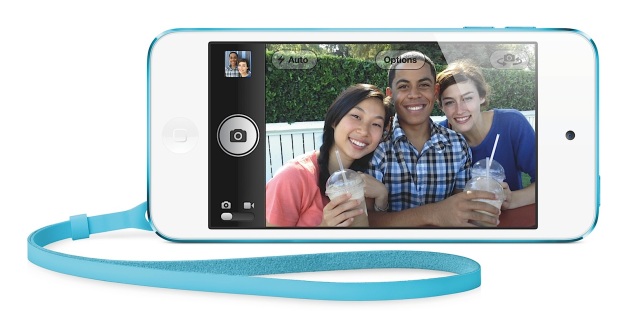 Today’s Apple event was all about the iPhone 5 (for some) and what he bring sush as a features. And no the Cupertino company has also announced the new, 5’th-generation iPod Touch and the brand new iPod Nano.

The new iPod Touch has the same display used in the new iPhone 5 – a 4-inch Retina display (1136 x 640 resolution at 326 ppi) with a 16:9 aspect ratio. Under the hood of the iPod Touche we have a A5 chip inside, which is the same (as in the iPhone 4S) that Apple says it provide up to seven times faster graphics than previous gen iPod Touch. The 5’th generation of the iPod Touch has a 5MP backside-illuminated sensor and a bright f/2.4 lens. With this new camera now you have the ability to shoot videos up to 1080p that include a bunch of cool features such as image stabilization and panorama shooting.

In the Connectivity side, the new iPod Touch will feature, Bluetooth 4.0, 802.11 a/b/g/n and support for AirPlay mirroring. In addition to that Siri is now support the iPod Touch. The new iPod Touch weighs 88g, and just 6.1mm thick and comes with an improved battery rated for 40 hours of music playback or 8 hours of video.

Inside the new iPod Touch’s box, you’ll find Apple’s new EarPods. While the previous generation was available in only black or white, now Apple are launching the iPod Touch in variant colors such as – pink, yellow, blue, white, silver, black, and slate.

Finally the iPod Touch will start in Pre-orders on September 14, and will available in stores starting from October, and will comes in 32GB and 64GB varieties retailing for 299$ and 399$, respectively.

The iPod Nano will have some improvement as well, the seven Nano generation is now 5.4mm thick, which is 38-percent thinner than the previous gen.

Other specs are the 2.5-inch, (240 x 432) multitouch screen that include a physical button below, it has a pedometer, FM tuner with enhanced playback control functionality and Bluetooth radio. The new Nano gathers as well the new Lightning dock connector of the iPhone 5. The battery will go for up to 30 hours of media playback.

The iPhone 5 spotted in a video ahead of Apple’s wednesday event, seems to be close to the real deal 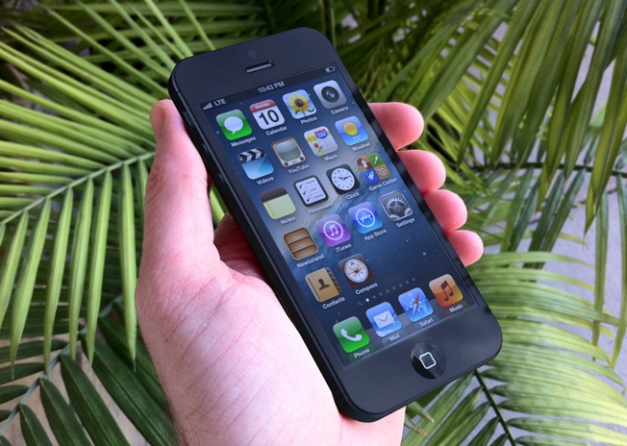 At day ahead of the big “Apple’s wendesday” announcement event, we decide it today to make a breakdown on what the next iPhone will have such as features :

Other thing to be mention is the NFC : Near-field Communication in the next-generation iPhone seemed all but certain a few weeks ago, but recent rumors suggest we might have to wait until next year for Apple’s iPhone to get enabled NFC.
Here’s donw below one of the coolest fake iPhone 5 ad to get us through the latest rumors in a quick and informative way. And kudos to the author, as this is one nicely done video :

The devil is in the details, as they say. But this guy has taken the extra care to do everything right. There’s no tell-tale YouTube icon on the homescreen and it has been proudly replaced by the latest Passbook app by Apple. Even the date on the calendar shows September 12. Oh, I love this sort of attention to detail!

What else can we look forward to on Wednesday ? Recent rumors point to new iPods and although it seems odd that Apple would clutter up its mobile event with new PCs, rumors point to a September or October launch for new iMacs and a new 13-inch MacBook Pro with a Retina display. As such, we may see them announced this weel as well.

Be sure to tune in at 1:00 p.m. EDT, 10:00 a.m. PDT (US Time) this Wednesday for all the news. We will be in place to give you all what you need to know about the new iPhone (iPhone 5) and everything else. So be sure to keep an eyes on our home page.