NVIDIA to manufacture a low-cost Android devices for other companies

Following the rather modest success of the Tegra platform in the smartphone and tablet segment, it seems NVIDIA is now gunning for a bigger share of the pie, so far dominated by the likes of Qualcomm and Mediatek.

According to Eldar Murtazin of Mobile-review.com, NVIDIA is planning on manufacturing smartphones and tablets of its own and will be selling them to companies to be rebranded and sold under their brand.

The plan is to manufacture reference designs for smartphones and tablets, the way they do it for their computer graphic cards (or Intel does for their phones). Then, instead of selling these designs under their own brand name, NVIDIA will license it to companies, who will then rebrand them and sell it in markets around the world. We already see this happening a lot in markets such as Russia and India, where several companies are selling what are essentially cheap, China-made devices under their own brand name.

What this will do is help increase the penetration of the Tegra platform, especially into the budget handset market, which undeniably forms the major portion of all the Android device sales.

This plan is expected to go into action by May-June this year, with both budget as well as premium tablets being released under various brand names that may or may not have the NVIDIA logo on them.

CES 2013 has started, and NVIDIA’s CEO Jen-Hsung Huang, has just revealed the next industry-leading processor by NVIDIA’s clock, that being the Tegra 4. This processor works with 72 GPU cores, 4 A15 CPU cores, and the ability to work with 4G LTE. The first test this processor was put to live on stage was between itself in an unnamed tablet and the Google Nexus 10 – loading webpages on the Tegra 4 (imagine that) finished much, much quicker than the Nexus 10.

This processor loaded 25 unique, high traffic sites in 27 seconds while the Nexus 10 loaded the same in 50 seconds. That simple test means one thing, said Huang, is that if you’re loading a webpage with the NVIDIA Tegra 4, you’ll get it “in one second”, while when you’re working with the current most powerful tablet on the planet (the Nexus 10, so they say), you’ll get it “in two seconds.”

In a comparison chart onstage, Huang showed the Tegra 4 as fastest, the iPad 4 as right behind it (though slightly slower, of course), the Nexus 10 coming in next, Droid DNA after that, and the Kindle Fire HD down at the bottom of the pack. Though we’ll be investigating these claims in the very near future, it’s fairly plain at the moment that NVIDIA’s architecture here is the most powerful solution for mobile devices on the planet.

Stay tuned as we continue to transmit all the details straight from CES 2013 through our massive CES portal all week long!

Microsoft has unveiled its own Windows 8 tablets : Surface for Windows 8 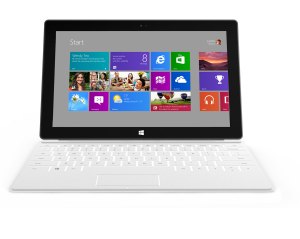 Microsoft as it mentioned before, had just announced their own tablet, named Surface, which blurs the line between tablets and ultrabooks. The 10.6″ slate features simplistic design and compact measures, while offering a full-blown Windows 8 experience.

Microsoft’s latest creation will be released in two diffrent versions. The entry range will runs Windows RT for ARM based chips, while the fully tricked out version will be running Windows 8 Pro. Both versions will pack a 10.6-Inch display as mentioned above. The one found in the Windows 8 Pro version however, will be a full HD unit.

Here’s a brief review of the specs sheets, Pricing and availibility :

The Windows RT version is only 9.3mm thikness and weighs 676 grams. It will come with 32 or 64GB of built-in storage and the connectivity side it will include microSD, USB 2.0, Micro HD Video, 2×2 MIMO antennae. Expect the tablet will be commercially available around the time when Windows 8 gets launched, with a price in line with its rival offerings, according to Microsoft.

The Windows 8 Pro version tablet will come much closer to being a full-blown PC. It will be thicker and heavier than its Windows RT running sibling at 13.5mm and 903 grams respectively. The Pro Surface will come with more built-in memory as well. You will be able to grab a 64 or 128GB version of it. The connectivity side of the Surface pro will include microSDXC, USB 3.0, Mini DisplayPort Video, and 2×2 MIMO antennae. The Surface Pro will be available about three months after the entry-level version of the slate. It is said to be priced in line with similarly equipped ultrabooks.

Check out the promo video, which is quite impressive. And after the break be sure to tell us after the what you think about the products in the comment section.

Both the Windows RT running surface and the Surface Pro will feature a built-in kickstand, which will pop out of their vapor-deposited (PVD) magnesium case. The coolest feature for the slates however, is the Touch Cover. As its name suggests, the accessory looks like a typical tablet cover on the outside. Once you flip it open however, it reveals a full blown touch sensitive QWERTY keyboard, to go with a touchpad of the same sort. Furthermore, the Surface Pro will feature Pen input with Palm Block.